My Three Takeaways After Two Days with Jack Stack

I just spent a couple days in Springfield, Missouri. Known as the “Cultural Center of the Ozarks,” Springfield was ranked by Forbes Magazine in 2016 as #74 on “The Best Places for Business and Careers” list. It’s the home of John Goodman, Brad Pitt, Jerry Jones (hey, I’m a Dallas Cowboys fan!) and Payne Stewart. It’s also the corporate home to O’Reilly Auto Parts, BKD and Bass Pro Shops. Finally — and my reason for being there — it’s the home of Jack Stack’s world-famous SRC Holdings Corporation, known for pioneering open-book management and the launch of The Great Game of Business more than 27 years ago. GGOB is just one of eight divisions under the massive SRC Holdings, Inc.

I had the privilege of sitting in on several days of Sales and Marketing Business Reviews for each division. They encompassed leadership and management teams of a couple hundred very smart, very financially literate company owners (SRC is employee owned, after all). Mojo Media Labs is actually the agency of record for The Great Game of Business and I’ve known Jack Stack for several years. Whenever I am around him, I just start taking notes… both literally and mentally. I am better for it, both as a person and business owner.

There is a lot of Springfield influence in Mojo’s culture. While a lot of mentors have had an impact on it, I would put Jack Stack at the top. Here are three takeaways from my latest visit with him:

Jack started the first meeting with a comment, “This is my 67th sales and marketing meeting.” They have these big business reviews two times a year and are currently in a ten-year plan. Therefore, Jack has led over three decades of superior business focus at SRC. Did you know that SRC shares have outperformed the DOW and Warren Buffet’s Berkshire stocks? 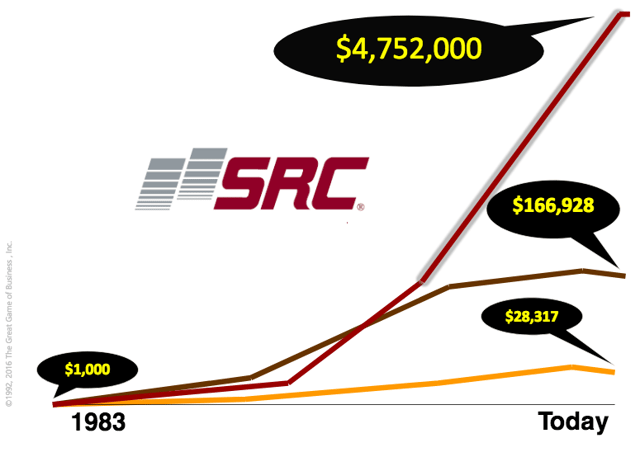 He continued to reinforce his four-part plan that everything in this big and complicated operation rolls up to serve. Then he made this statement:

“You get what you want when you decide where you are going.” - Jack Stack

Wow. If you know what you want, you truly visualize what you want, then make the decision to get going, not knowing what obstacles might be out there — you simply zero in anyway on your plan and persist to you get what you want. After the SRC meetings, I had the privilege to attend Warren Buffet’s famous annual stockholder meeting and behind-the-scenes meetups with the leadership teams of several Buffet companies. The population of Omaha is less than three times that of Springfield, but I left with ten times more knowledge of how to add value to Mojo Media Labs and the value of our amazing clients.

2. Always have a contingency plan.

As you venture down the road of getting what you want, it is riddled with situations that seem like they can knock you off the path. An old Chinese proverb says that if you get up one more time than you fall, you will make it through. Jack always asks something similar: “What is your contingency plan?” I think this goes with the persistence required to getting what you want when you decide to get going.

Jack believes in setting a long-term plan, creating smaller plans that involve forecasting, then measuring progress on a weekly basis. If you are off your forecasted numbers that make up the plan, you better be ready with a contingency plan. I think this is one of the most impressive traits of any of the owners at SRC Holdings. On Saturday, before the meetings, they had a “Wealth and Health” company picnic. More than 2,000 owners and family members showed up. Wow.

Contingencies keep you on plan, but also generate great ideas that can be used to start new businesses and diversify your current business.

3. Everyone should contribute to adding value in the company.

Jack really does not like when people think like employees. You know what I am talking about. The clock punchers, the ones who are in it for only themselves, the ones who never really give their 100% (but complain about their situations), the leaders who still think that command and control is a good management guideline.

Because SRC is an employee-owned company, everyone thinks like owners. Your company does not have to be employee owned to create this value-add ownership thinking, however. That’s where The Great Game of Business comes into play. GGOB is the “living lab” at SRC Holdings. The guiding force behind the thousands of businesses it has impacted. GGOB was developed by Jack 27 years ago. In my opinion, it’s the only way to run a business.

Jack told me that when they originally started mixing the name game and business, ‘business experts’ killed him. Now they call him a genius because “millennials” love gamification and The Great Game of Business is perfect to show how not just millennials, but everyone can add value to a business. In my experience, since practicing GGOB at Mojo, we have seen a huge additional spike of team member engagement. Including interns!

Do you want to experience SRC yourself? The Great Game Experience is a good place to start. Click here to learn more and register.